What follows is just a brief summary of basic theory and harmony necessary to understand practical applications on your instrument.

The natural sounds are:

You might also find in some books the name of these notes in Italian (nothing to do with ‘solfege’!) Do,Re,Mi,Fa,Sol,La,Si and in German C,D,E,F,G,A,H.

# = sharp: raises the given note of a half step.

b = flat: lowers the given note of a half step.

bb = double flat: lowers the given note of two half steps.

The chromatic scale contains all 12 natural and altered sound (using sharps and flats).

Notes called with a different name, but identifying the same sound, are called enharmonic (i.e.: C# e Db). The shortest distance between two sound of the chromatic scale is a Half Step, the distance of a fret on the guitar.

An interval is the distance between two notes.

All the intervals from the tonic of a major scale to any other note of tha scale are major or perfect (i.e. between C and D=major 2nd, C e E=major 3rd, C e F=perfect 4th, and so on…)

Intervals can also be calculated summing up half steps:

How to build a major scale.

The spacing of the notes in a major scales follow this rule:

Where W = Whole step (a major second)  H= Half step

This is a list of all the major scales in all keys. The order follows the amount of sharps and flats in the key.

Every major key has one relative minor which is made of the same notes, but starting from the sixth note. In other words, starting a minor third below (or a major sixth above) the root of the major scale. For example if we take C major its relative minor is A minor, spelled A B C D E F G.

The circle of fifths one of the most used ways to summarize all I explained so far. It is very useful to memorize how many and which alterations a specific key has.

I find very useful to memorize FCGDAEB and the same sequence backwards BEADGCF. The first is the order of sharps the second, of flats. So if a key has, for example, 3 sharps (A major) they will be the first 3 notes in the first seqence (F# C# G#).

If I stack on every degree two more notes a diatonic third apart (basically every other one) I end up with different kinds of triads (triad=group of three notes). These triads are shown in the example below. If we analyse the intervals between notes:

a Diminished Triad has a min 3rd and a diminished 5th.

If we stack another note a diatonic third apart from the last note of the above triads we will have Seventh chords.

This again is valid for all the 12 keys. This concept is vital to understand how songs are built and how to pick the correct scale for a solo.

Hi There! If you liked these lessons: Download all the products In This Page in exchange for a donation to support the site (minimum $10): my 4 eBooks+Mp3 examples, and 84 blues backing tracks (divided in 7 sets). A total value of $149 at full price on other sites!

Use the drop down menu if you want to donate more, it's appreciated!  All products on this page are digital goods you can download instantly after a successful Paypal checkout. 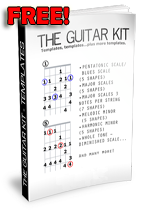 Download “The Guitar Kit” – All the templates you will ever need to learn or teach guitar: Pentatonic Scale, Major and Minor Scales, Blank Templates…

Other Related Lessons and Articles:

Just a few examples from the triad pairs video: http://www.TrueGuitarist.com/triad-combinations-also-known-as-triad-pairs/